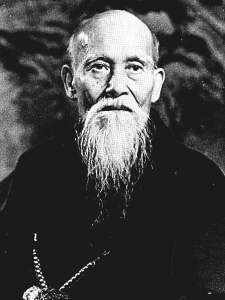 Aikido is a highly sophisticated medium for self growth-non-competitive in nature, yet powerful in application. Aikido offers an intense study of ki or life-energy, promotes mental, physical, and spiritual integration, and teaches the creative use of harmony to resolve violence both within the self and within the world.

Aikido is a manifestation of a way to reorder the world of humanity as though everyone were of one family. Its purpose is to build a paradise right here on earth. Aikido is nothing but an expression of the spirit of Love for all living things. It is important not to be concerned with thoughts of victory and defeat. Rather, you should let the KI of your thoughts and feelings blend with the Universal. Aikido is not an art to fight with enemies and defeat them. It is a way to lead all human beings to live in harmony with each other as though everyone were one family. The secret of Aikido is to make yourself become one with the universe and to go along with its natural movements. One who has attained this secret holds the universe in him/herself and can say, " I am the universe. " If anyone tries to fight me, it means that s/he is going to break harmony with the universe, because I am the universe. At the instant when s/he conceives the desire to fight with me, s/he is defeated.

Non-resistance is one of the principles of Aikido. Because there is no resistance, you have won before even starting. People whose minds are evil or who enjoy fighting are defeated without a fight. The secret of Aikido is to cultivate a spirit of loving protection for all things. I do not think badly of others when they treat me unkindly. Rather, I feel gratitude towards them for giving me the opportunity to train myself to handle adversity.

You should realise what the universe is and what you are yourself. To know yourself is to know the universe.

The goal of Aikido training is not perfection of a step or skill, but of becoming one with nature. And it is this aspect which is appealing to Westerners, especially to those who have an interest in Zen. Aikido, sometimes called " moving Zen," provides guidelines for improving the human spirit, and the fact that it is now spreading throughout the world may well be because people are starting to seek, through martial arts, not physical strength, but strength of character, or harmony between their spirit and mankind. Through the practice of Ai-kido, one's character is developed so that one becomes " tough " inside in such a way that this strength is expressed softly in movement. This is exactly like nature: Nature's movements are efficient, rational, and soft, but the centre is immovable, firm, and stable. These should become as one, so that the culmination of nature can be expressed. Maintaining this firm, stable centre, Aikido movement, with its emphasis on spherical rotation, is characterised by flowing, almost dance like, circular motions (pivoting, entering, circling) that are used to overcome and.control the strength of the opponent. The principle of spherical rotation makes it possible to defend one's self from an opponent of superior size, strength, and experience. Although Aikido movements are as soft, rational, and smooth as nature, by applying a bit of force, it can become " tough " and devastating. The soft or gentle quality of Aikido makes it appealing to people of all ages. It not only offers spiritual development, but also provides exercise and teaches proper etiquette and behaviour. At the heart of Aikido is the Oriental concept of the universal creative principle, Ki. Aikido (" the way of harmony with Ki ") seeks to achieve the total unification of this universal Ki with the Ki (life force or breath) of the individual self.